Correctional institutions face a constant battle to limit the flow of contraband into their facilities.

Traditionally, contraband has been smuggled into prisons by corrections staff, visitors, “throw-overs” and through the mail. As soon as one delivery method is stopped, criminal organizations immediately find new methods and technologies to meet illicit demand.

As a result, drones are used more than ever before to deliver large amounts of contraband directly to inmates because they are cost effective, efficient, and offer the pilot/offender a chance of anonymity.

Since state and local corrections departments are not legally authorized to mitigate or intercept drones, their efforts to stem the tide of contraband must rely on consistent identification of, and swift response to, drone incursions.

Contraband introduced into prisons ranges from nuisance items such as radios, pornography and cash to dangerous items such as drugs, phones, escape tools and weapons that comprise inmate and corrections officer safety. 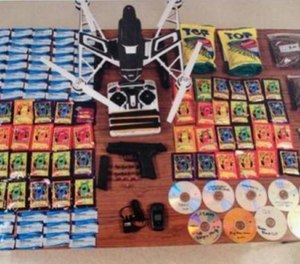 The use of drones to deliver contraband is a fairly straightforward endeavor. Sometimes drone pilots will actually advertise themselves on Craigslist.

A drone is purchased and outfitted with a payload release mechanism which is easily purchased online for less than $40. The attachment consists of a simple mechanism that retains the package until the unit’s remote control is activated to release the payload.

The amount of contraband that can be delivered depends on the specific drone’s payload capacity, flight distance and flight conditions.

Mini drones such as the DJI Mini 2 have a payload of .5 pounds and a stated battery life of 31 minutes.  In reality, however, the flight time drops to around 5 minutes when flown at full speed. 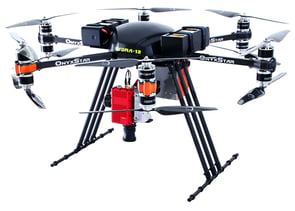 Once the desired payload has been determined, the operator simply calculates the capacity and flight time to ensure a successful contraband drop. More often this is done with test flights.

A Glock 42 polymer .380 handgun weighs 12 ounces unloaded. Add 6 rounds in the magazine and 1 in the barrel and the guns tip the scales at 14.4 ounces.  If the criminal is using a DJI Phantom 4 drone, they can reasonably deliver a Glock 42, a Unihertz Jelly Pro 4G phone with charger and 2 pounds of marijuana, rolling papers and lighters for a $2,000 investment in the drone equipment. With extra batteries the operator can fly multiple missions in an hour.

The operator will position themselves in an inconspicuous location near the correctional facility that will support the number of deliveries desired, ensure the battery won’t die mid-operation, and of course, provide a fast exit route if discovered.

Where the operator drops the contraband inside the facility will be coordinated with the inmate in charge of the operation. Operators can drop the package in a remote corner of the yard at night, and the intended inmate or corrupt staff will know to go straight there.

Corrections officers conduct sweeps before inmate release, but those patrols have varying efficacy. If the intended recipient does not get to the contraband first, then fights may ensue to control the contraband’s distribution within the facility. With well-trained pilots, drone deliveries can also be coordinated to drop the package directly into an inmate’s hands in broad daylight to ensure accurate delivery.

While the premise of drone-borne contraband is simple, the mechanics of flying a garbage bag full of contraband by drone is actually quite challenging. The added weight causes erratic drone behavior especially if there is wind and drains the battery faster than a pilot may anticipate which can cause drone and payload crashes onto roofs, into fences or, in some instances, they never make it out of the woods in which they are operating because the payload becomes tangled in a tree branch.

If successful, the drone operator positions the drop over the delivery area, releases the contraband and flies back for a rapid getaway or additional delivery flights. Operations may include multiple drone pilots for simultaneous or consecutive deliveries or decoy or lookout drones to watch for response unit activity on-site or even at the warden’s residence or local law enforcement offices.

A few clever pilots who know that some drone detection systems only detect DJI drones have taken to flying waterproof drones which they land in a nearby pond after the drop for later recovery.

It’s simply not enough to rely on training corrections officers to spot incoming drones. The truth is drones are often confused as birds, planes, or other aircraft and can pretty quickly introduce harmful contraband. Furthermore, drone operators may try to overwhelm corrections staff by flying multiple drones at a time, and pilot(s) are likely to return if not caught on the first attempt.

One of the primary objectives of a drone detection system is to prevent contraband deliveries. A system that offers a high-confidence level alert of drone and pilot location, no matter the manufacturer or type and when the devices are still at ground-level, can prompt appropriate prison actions such as prison lockdowns. Swift and consistent response serves as a deterrent for criminals attempting contraband deliveries.

Other articles in this series: